"When one eats food offered by a materialistic man, one's mind becomes contaminated, and when the mind is contaminated, .one is unable to think of Krshna properly. 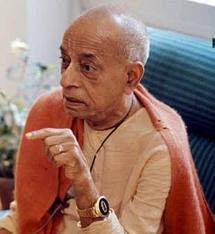 "When one eats food offered by a materialistic man, one's mind becomes contaminated, and when the mind is contaminated, one is unable to think of Krshna properly.

Śrīla Bhaktisiddhānta Sarasvatī Thākura suggests that people who are materialistically inclined and sahajiyās, or so-called Vaisnavas who take everything very casually, are both visayīs, or materialists. Eating food offered by them causes contamination, and as a result of such contamination, even a serious devotee becomes like a materialistic man. There are six kinds of association — giving charity, accepting charity, accepting food, offering food, talking confidentially and inquiring confidentially. One should very carefully avoid associating with both the sahajiyās, who are sometimes known as Vaisnavas, and the non-Vaisnavas, or avaisnavas. Their association changes the transcendental devotional service of Lord Krshna into sense gratification, and when sense gratification enters the mind of a devotee, he is contaminated. The materialistic person who aspires after sense gratification cannot properly think of Krshna.

viṣayīra — offered by materialistic men; anna — food; haya — is; rājasa — in the mode of passion; nimantraṇa — invitation; dātā — the person who offers; bhoktā — the person who accepts such an offering; duńhāra — of both of them; malina — contaminated; haya mana — the mind becomes.